We invite you to discover and visit this beautiful village, surrounded by a gorgeous natural landscape. We are closed to Santiago de Compostela and other touristic points.

PENSION PURA (A PIECE OF HISTORY) 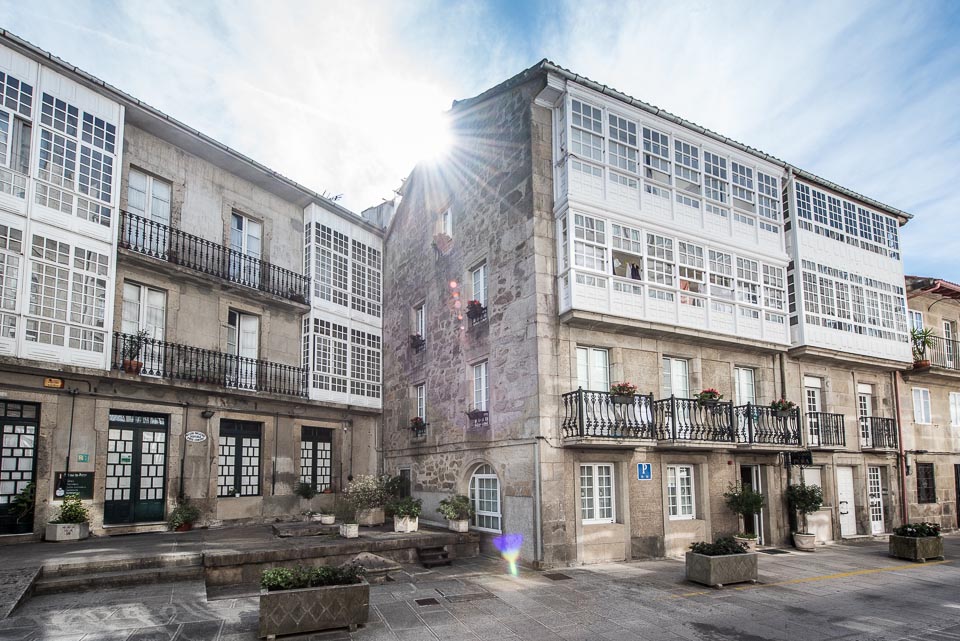 Pension Pura is located in a building of granite stone dating from the nineteenth century. It is a typical example of nineteenth-century Galician popular architecture; the urban housing should be rebuilt at that time, because Cuntis was burned during the War of Independence (1810). This beautiful building of four floors was built on the ruins of a Roman spa as there have been found documents that certify the existence of pools on this site and nearby.

Specifically in 1831, Manuel Xacobe Fernandez Mariño (Medical Director of Cuntis Spas) found next of Pura Hostel several archaeological remains. In addition to protect them, he identified the existence of a Roman pool made of mortar, a piece made of bronze that could belong to a Roman mayor and an inscription.

There is also evidence of the discovery of coins of that era that should have been delivered as offerings to the gods that “inhabited” the thermal springs. 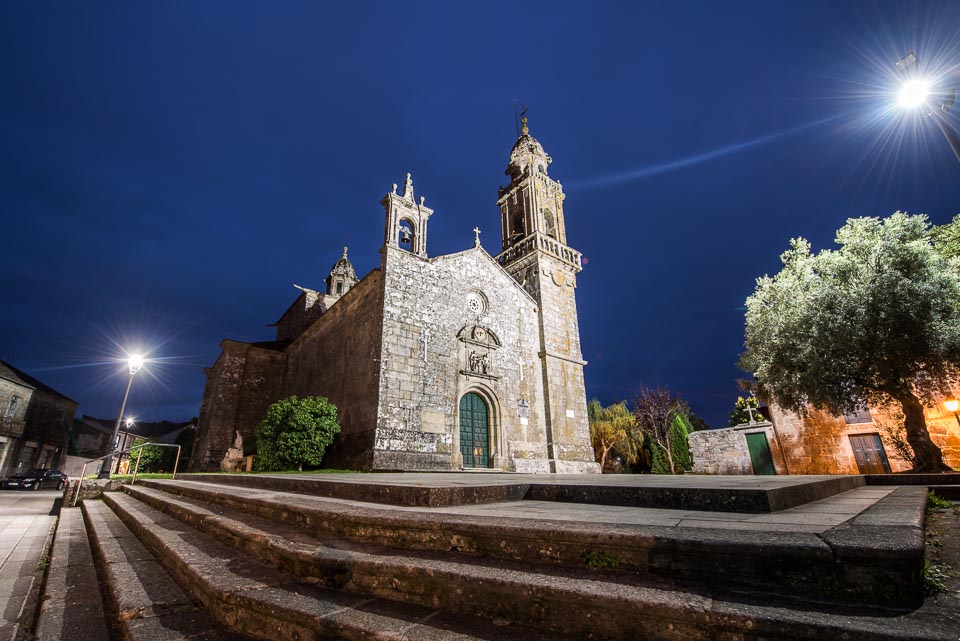 In its surroundings they have found remains of Roman period. It should be pointed out, based on existing evidences that the building of Santa Maria Dos Baños have been a medieval monastery in the eleventh century.

Named as Santa Maria de Termis during its monastic period, the infrastructure was owned by a local aristrocrazy; later changes its function to the parish church. The current building is a beautiful Galician example of ecclesiastical architecture of the eighteenth century, where there are different styles and medieval remains. Regardless of their majesty, inside of the building there are preserved beautiful “treasures” of religious imagery from Galicia, designed by Gambino, Ferreiro, Uxío Souto and Asorey, among other sculptors. 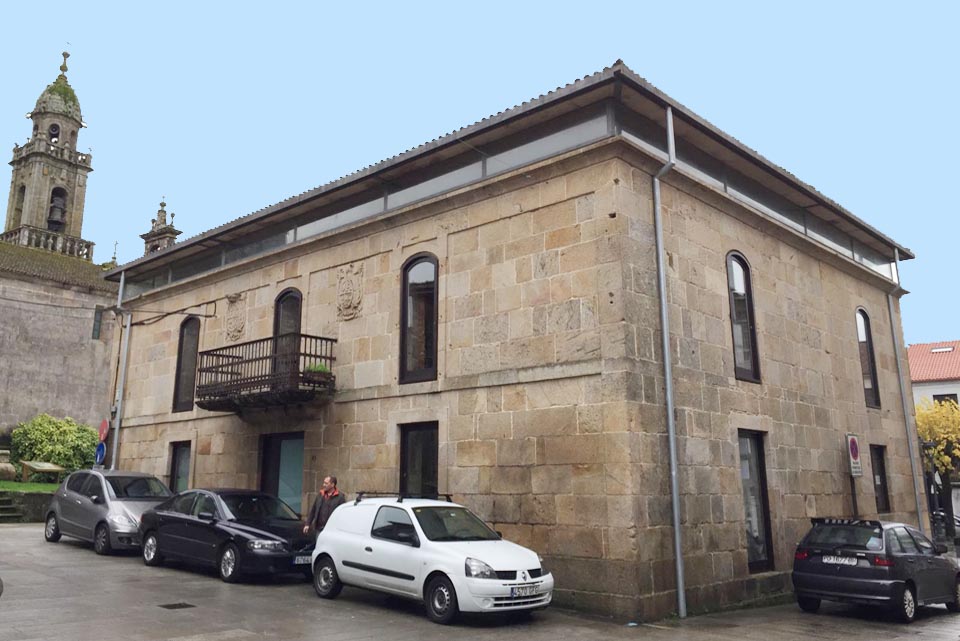 Known as Hospitaliño (small hospital) due to care role played during the nineteenth and twentieth centuries, nowadays is the library of the village. It is a baroque building that retains a couple of coats of arms representing the families who lived there: the Nuñez de la Fuente and Castro. One of its members was Vicente Xose de Castro Lira, he was a deputy and contributor in the Cortes of Cadiz in the creation of the Constitution of 1812. Pedro Cerviño Nuñez de la Fuente who was responsible for the designing of the city of Buenos Aires during the nineteenth century, also lived in this gorgeous building. 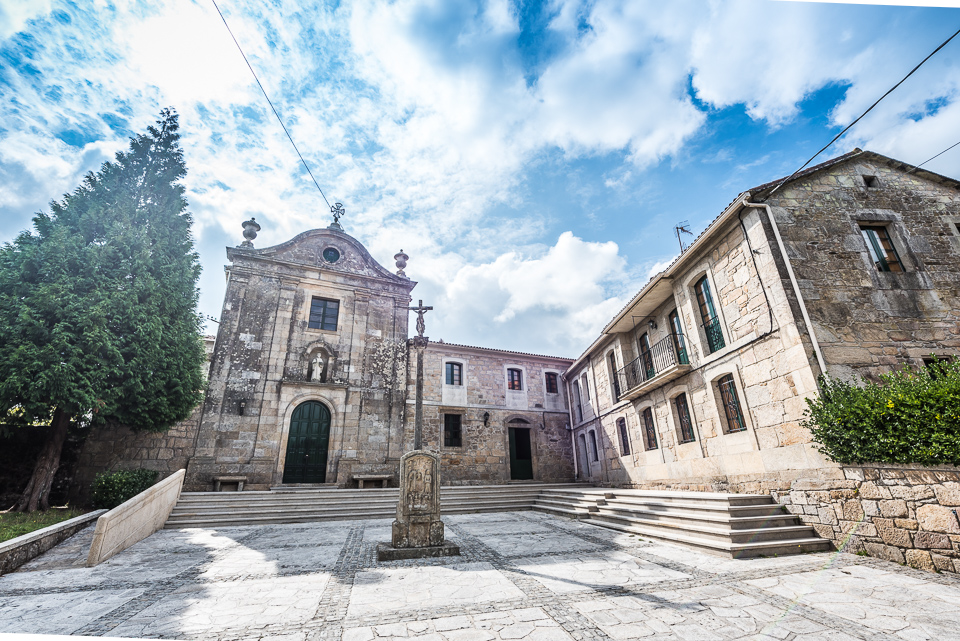 San Bieito de Pereira is the last feminine convent of the Order of San Benito founded in Galicia. This is due to the efforts of Carmen de San Jacobo Baliñas Castro, noblewoman of the town that spent all her assets to make this foundation, which begins to consolidate in 1868.
Inside the building live a community of nuns who make different types of sweets. From the building it can be highlighted the temple itself, whose altar reminds the Baldacchino di San Pietro in the Vatican, and its images.
At the entrance of the monastic enclosure it is preserved a stylized ‘cruceiro’ provided with a curious ‘peto de ánimas’ where people left alms for the souls in purgatory. 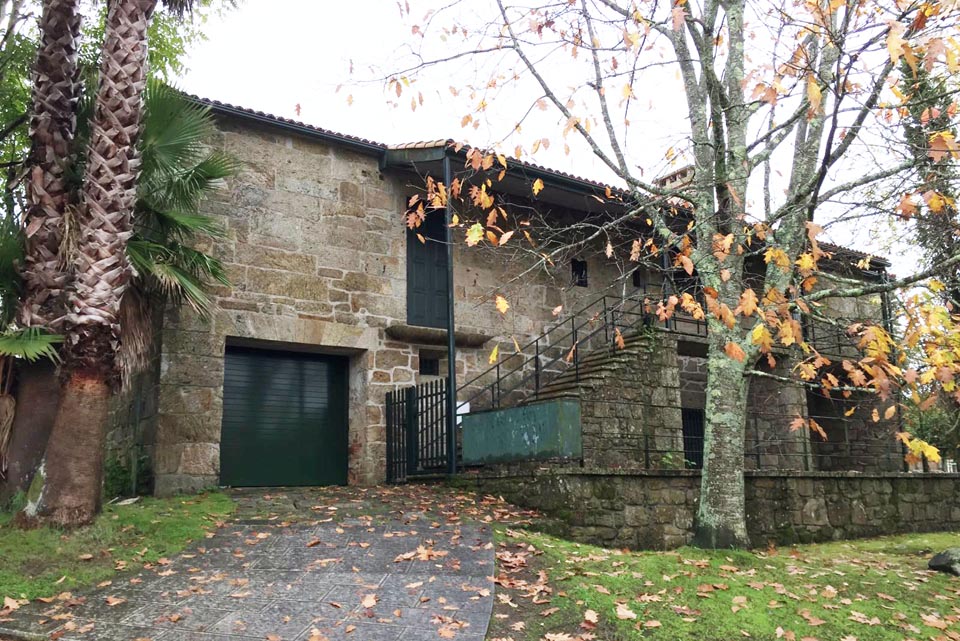 It is a two floor building made of granite stone. Along its history had to undergo several renovations, especially being aware that the battle against Napoleon’s troops supposed to reconstruct much of the urban area of Cuntis. In its surroundings is preserved a beautiful dovecote and a granary, clear evidence of the Galician popular architecture.
There is also a coat of arms in the public gardens, where are represented the arms of the families of Núñez de la Fuente and Castro, accompanied with characteristic emblems of the Inquisition. This is due to Xoán da Fonte was the notary in charge of this congregation during the eighteenth century.

MONUMENT AND PARK OF MARANS 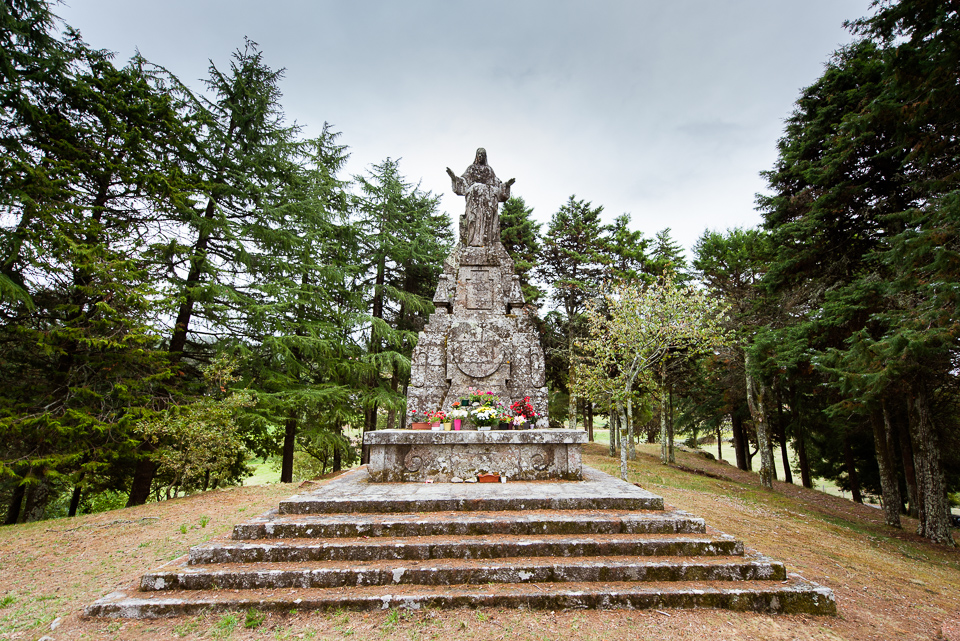 In the mountainous elevation of Marans (less than 1 km of from the center of the town), are located a park and a great viewpoint where people can enjoy native and foreigners trees such as cypresses and cedars. This place is perfect for reading, meditation where the freshness makes pleasant moments. By the forties of twentieth century, the great sculptor Francisco Asorey creates an impressive image representing the Sacred Heart of Jesus. It is located in the top of this small mountain and it is stands on a small chapel, almost built in granite stone. 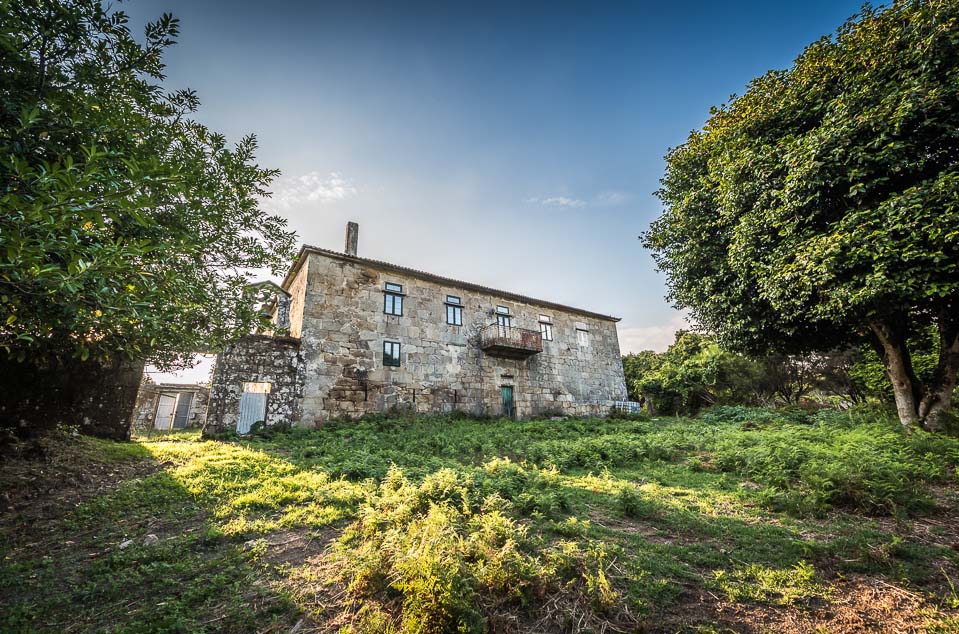 This gorgeous building is located in the Cuntis parish of San Fins das Estacas dated on medieval times. With over 400 square meters per plant, the main construction is accompanied by others such as dovecote (before was a watchtower) a raised granary and an enormous stable among others. The main building has undergone several constructions and additions over the time you can enjoy during the visit. In the surroundings of the building there is a big oak forest. 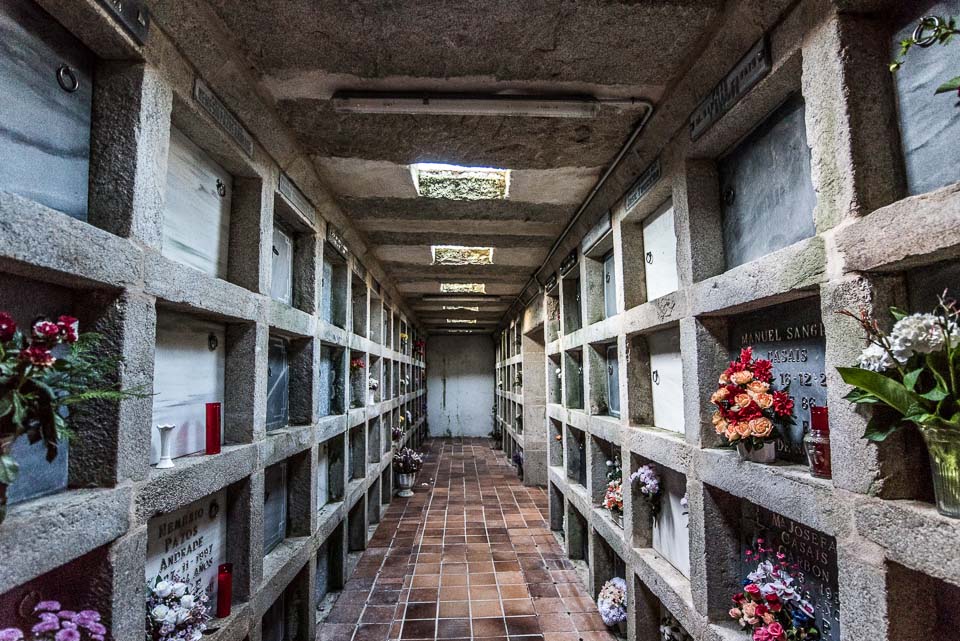 It belongs to the church of San Breixo de Arcos de Furcos. The cemetery is divided into several parts and contains several underground galleries with a large number of niches. In the atrium there is one of the oldest stone crosses of the surroundings. On the cross it appears a Jesus Crucified and a Virgin Mary carrying the body of her dead son. There is also a baldachin dated on mid-sixteenth century. 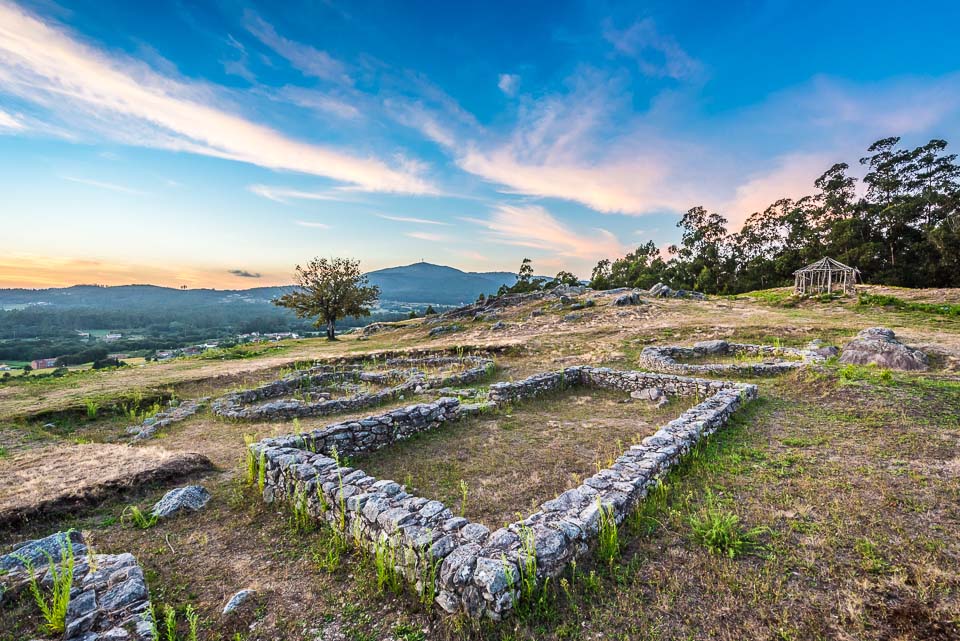 There are numerous forts that exist in township of Cuntis. Some of them are very old as Sebil fort; others are more recent as Castrolandin who is a typical construction of the Iron Age. The constructions of this fort are rectangular and it offers you great views of the valley of the town and surroundings. The chronology range covers from the seventh century B.C. to second century A.C. 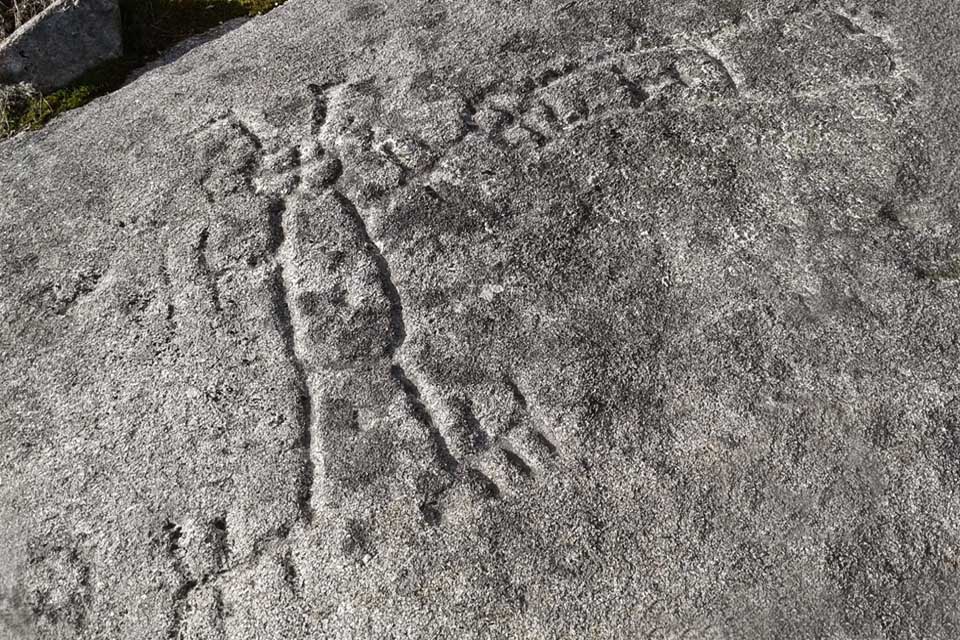 A petroglifo is an engraving own rock prehistoric peoples of Neolithic period. There are several rock groups throughout the township. The majority are located Cequeril (Laxe dos Homes and Outeiro do Galiñeiro), Cuntis (Cartas de Fóra, Outeiro do Moucho y Outeiro das Campás) and Troáns (Outeiro do Forno da Tella y de Vales).
These rocks art dating from the third to the second millennium B.C. (Bronze Age) 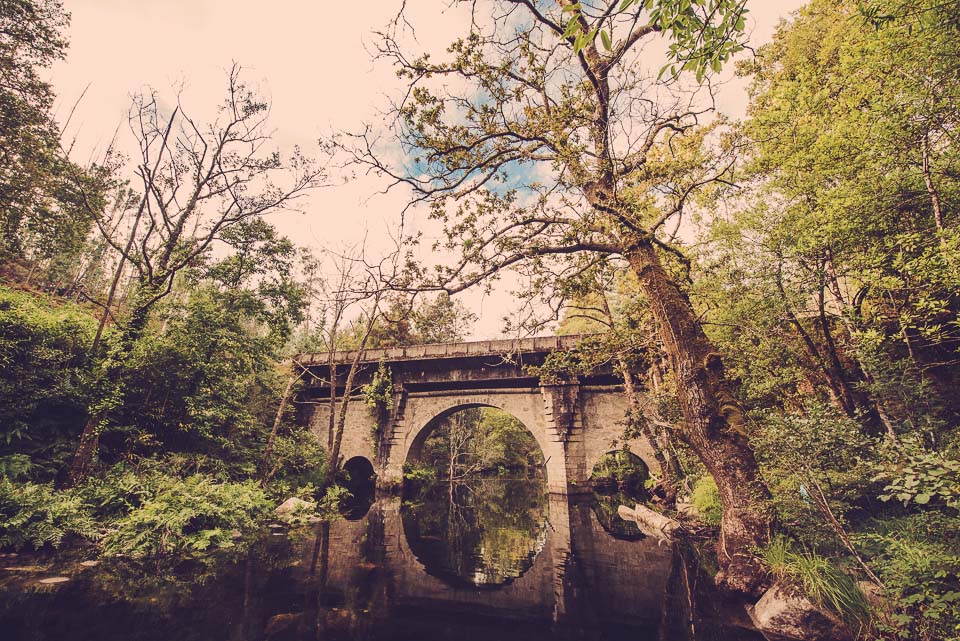 After leaving Portuguese lands, the pathway runs through the following main towns: Tui, Porriño, Redondela, Pontevedra, Barro, Caldas de Reis, Valga, Pontecesures, Padrón and it ends in Santiago de Compostela.
There are also several secondary alternatives of the pathway documented. To arrive till Santiago pilgrims can go since Barro crossing the lands of Moraña, Cuntis, A Estrada and Teo. Therefore the pilgrims can enjoy the thermal waters of Cuntis and its surroundings. Another alternative is the path that crosses Tui, Porriño, Mos, Pazos de Borbén, Cercedo, Campo Lameiro, Cuntis, A Estrada, Teo ending in Santiago de Compostela.